The example of Candida albicans etc. – a widespread disease

Yeasts can make us very sick. One such example is the well-known yeast Candida albicans.

HOW TO BOOK AN APPOINTMENT 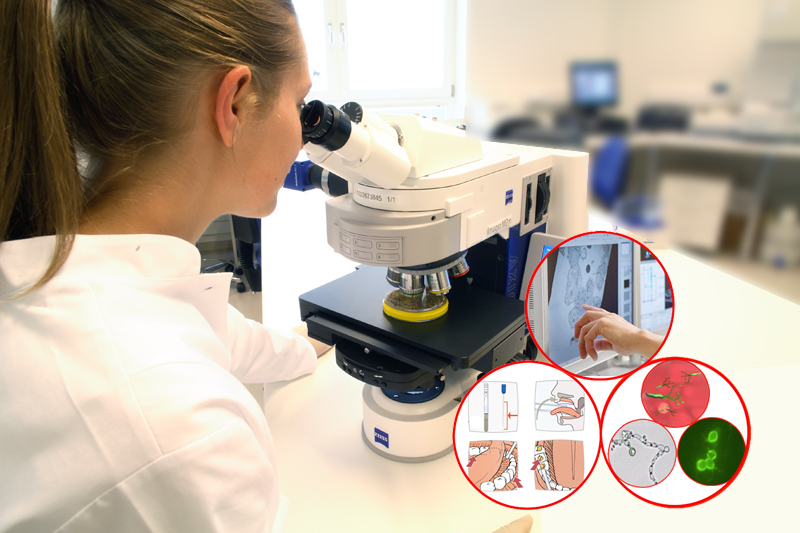 The example of Candida albicans etc. – a widespread disease

Yeasts can make us very sick. One such example is the well-known yeast Candida albicans. Due to its high prevalence rate, doctors and patients have become “accustomed” to the fact that “almost everyone has fungi”.

This, too, harbours the further danger of trivialising fungal infections. 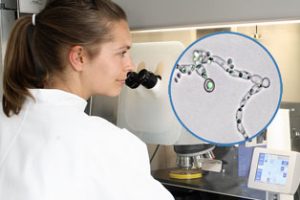 Probable contributing cause of many chronic diseases

In case of yeast fungi, which are often only known under the name “Candida”, a distinction must be made between pathogenic yeasts and harmless food yeasts. Within the genus “Candida”, only a few species are pathogenic, the yeast Candida albicans is one of them.

Incomprehensive or non-existent treatments of infections with pathogenic yeasts are favoured by many chronic diseases, which could be avoided with treatment in early stages. The consequences of not receiving treatment also include an increase in serious and expensive chronic diseases and a burden on the medical care system.

Already since the beginning of the 19th century, medicine researched the connection between many diseases and infections by pathogenic yeasts. Noted physicians and scientists published a wealth of studies and individual case narratives until the middle of the last century. (A compilation of world literature up to the 1990s can be found in Schirren, Carl (2004), The Development of Mycology in Hamburg using the example of H. C. Plaut and H. Rieth, Folia Dermatologica 2, Hamburg, open publication.

In these publications, the necessity of the absolute attention to such infections in all ranges of the medicine was stressed time and again. This happened long before the times of the Internet, which means that these notable works exist only in the form of old books of small editions or magazines.

This literature with the important findings of science and basic research is therefore hardly procurable today and also not yet available on the Internet.

Due of these deficits and their medical significance, Normamed provides progressive research results and essential literature on the topic: Literature Database Microbiology. 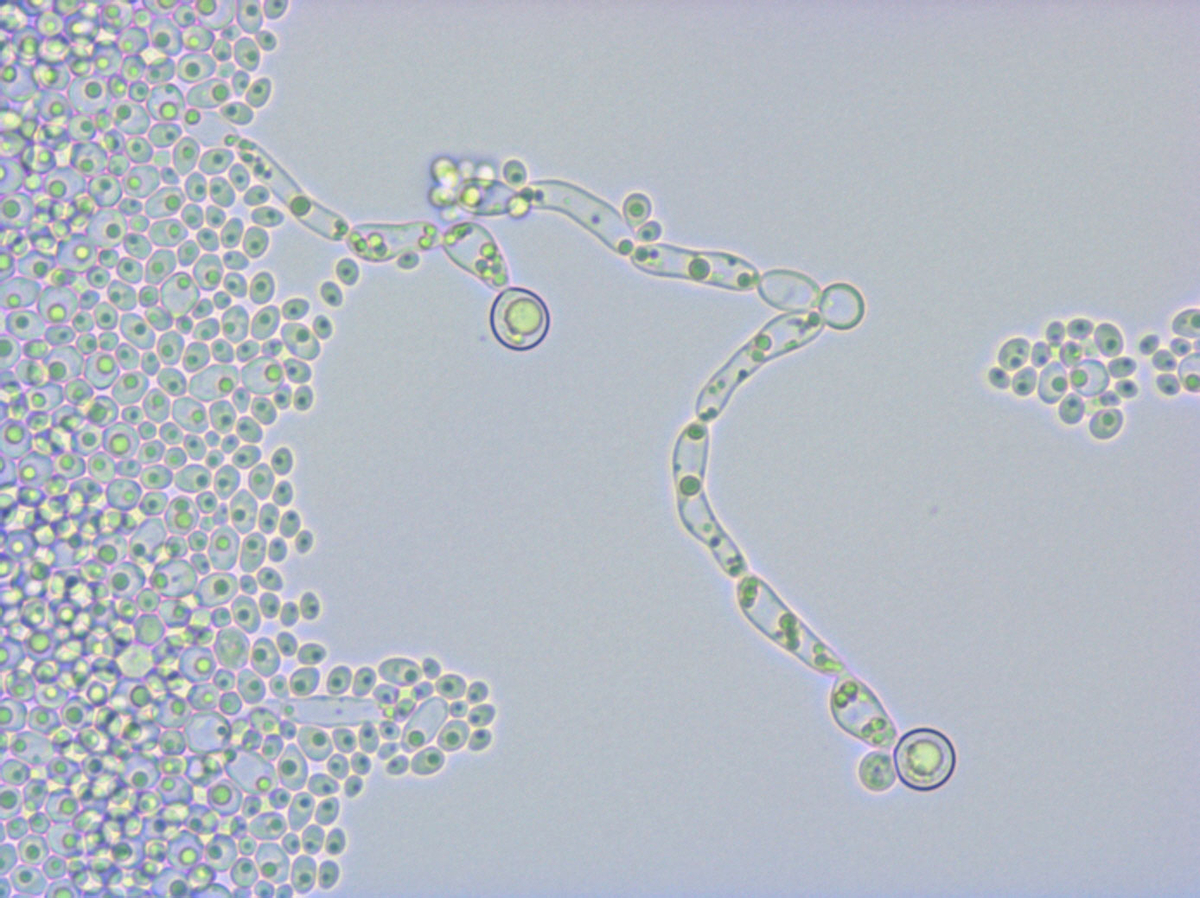 Reasons for the spread of Candida albicans infections

The fact, that the microbiological courses offered by universities have been increasingly scarce for decades, has further contributed to the misjudgement and, at the same time, to the spread of Candida infections.

In spite of long established findings and the great importance of these dangerous infections, these pathogens no longer play a major role in the medical care of all disciplines. The Internet often testifies to pseudo-specialist knowledge, which is disseminated against medically proven findings. Due to a lack of training and knowledge, there is hardly any research done in this field today. In this respect, scientific activities are quite a rarity. Conventional guidelines on the medical basics of mycology call for the gaps in education to be closed for the benefit of patients.

The high level of infestation that has developed from this for a long time – now-a-days mistakenly interpreted as normality – has far-reaching consequences for the health care system. It is time to consider the consequences of this development and draw the necessary conclusions.

Trivialisation of a widespread disease 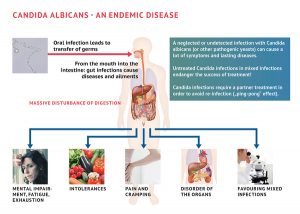 As with many other pathogens, one often does not (or not early enough) recognise high risk potential for those affected with Candida albicans. Initially, minor symptoms are often not treated at all or only isolated and often treated again. The risks and long-term consequences of the infection are not taken into account.

Candida albicans is often only known in gynaecology or partner healthcare as an itch-inducing and thus unpleasant and annoying – often recurring – symptom. The fungi are not only transmitted in this way, but also from mouth to mouth or from mouth to other mucous membranes. They reach the entire body via the gastrointestinal tract.

Candida albicans and also other pathogenic yeasts (such as Candida tropicalis, famata, glabrata, guilliermondii, krusei, parapsilosis and many more) can impair and disturb many basic functions of the body if left untreated – and gradually lead to complex disease patterns. These diseases can then often no longer be treated (as they could have been initially) briefly and without complications. The pathogenic yeasts have a high power of damaging many basic functions of the body, its cells and organs.

In the early post-war years, evidence was already presented in many publications, showing a direct connection between diseases and infection by Candida albicans. Caries, periodontosis, ENT infections, diseases and infestation of all internal organs, the bladder, and the kidneys are only some examples. If left untreated, they often lead to generalised mycoses. Frequent gastrointestinal ailments of many kinds such as reflux, pain, diarrhoea, constipation, food intolerances etc. have their origin in neglected mycology.

It is almost never noticed that, for instance, fatigue, tiredness, sleep disorders, exhaustion, digestive problems, pain in joints or even psychological complaints can also be caused by fungal infections, which have penetrated all basic functions of the body. It is essential to cite here that this can be avoided!

Pathogenic yeasts such as Candida albicans constantly release toxins. These are released from the digestive tract into the blood. The immune system and the entire metabolism are thus considerably disturbed. Toxins of these yeasts (fusel alcohols) put such a strain on the liver and kidneys that, for instance, fatty liver can develop over many years and/or chronic headaches can often be caused by them alone. These pathogens are also involved in the development of liver and kidney cancer.

An intestinal yeast infection develops 0.5 to 1 litre of toxic alcohol per day, which has to be broken down by the liver and then mainly washed out via the kidneys into the bladder. The effect of these toxins on the body is fatal.

Pathogenic yeasts can be one of the causes of many ailments

The Normamed method is used to search thoroughly and systematically for pathogenic yeasts in particular using reliable findings (the basis of which is also the research work of Prof. Dr. Dr. H. H. Rieth †, University Clinic Hamburg Eppendorf, photo from 1974).

They can basically be treated well – if you know how and if you have established beforehand which pathogen it is and where it has settled in the body. This requires special systematics and care.

To support medicine, we are making parts of the old scientific literature of Prof. Dr. Dr. Hans Rieth available to the public again gradually with the help of digitalisation. In many aspects, the often simple and understandable descriptions show a comprehensive expert knowledge that is no longer a matter of course today. The mycology of the present can also still profit well from the findings of the last century and use them as a basis for further scientific research. Please visit Literature Database Microbiology.

Do you have questions?